The UK Overseas Territory of the Pitcairn Islands is a chain of four small islands (Pitcairn, Oeno, Henderson and Ducie). The islands run west northwest to east southeast through the central South Pacific and have an exclusive economic zone (EEZ) of nearly 842,000 km2, with only 0.0001% land area (47 km2). The islands lie within the nutrient poor surface waters of the South Pacific Subtropical Gyre.

Pitcairn Island is volcanic with steep, rocky coastlines exposed to large ocean swells. Henderson Island is formed from a raised coral reef, and Oeno and Ducie are low coral atolls. Biodiversity around the islands is high and the marine area is one of the least impacted in the Pacific region. To maintain healthy ecosystems, the Pitcairn Islands Marine Protected Area was established in September 2016, covering the whole EEZ. It is one of the largest MPAs in the world.

On average, sea surface temperature (SST) in the Pacific Ocean increased by 0.31°C between 1950 and 2009, with monitoring sites in the Pitcairn Islands recording three marine heatwaves, in recent decades (1995, 2006 and 2017). Sea surface temperature could increase by more than 3°C by 2100 in the Pacific region due to climate change (under a high carbon emissions scenario), producing cascading effects on sea level, dissolved oxygen levels, net primary productivity, and pH. Sea level rise is projected to accelerate over the 21st Century and it is unclear whether the islands shorelines can adapt.

Important sectors, such as fisheries and tourism, will be affected by these changes, as will food and water security and essential services, such as energy, import of supplies, coastal protection, and community access to natural resources.

From an initial long list of impacts on biodiversity and society for this region, three priority climate change issues were identified by a regional working group of scientific experts and policymakers: 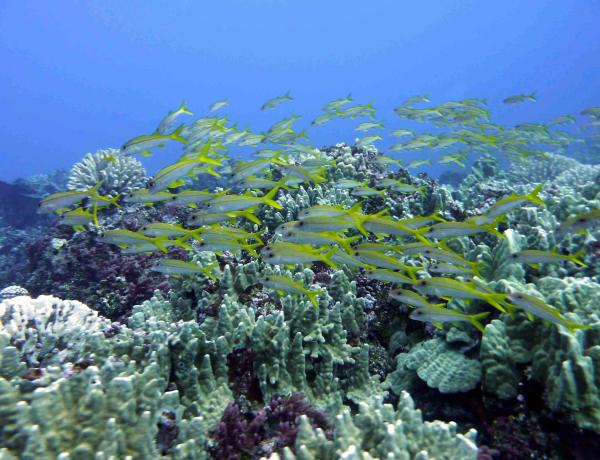 Pacific
Priority 1: Impacts on coral reefs and associated species
The Pitcairn Islands have a documented 48km2 of fringing coral reef habitats that support a diversity of fish and invertebrate species. Changes in ocean circulation, SST increases, ocean acidification, sea-level rise and extreme weather events are expected to affect the biology and ecology of reef organisms. The impacts of climate change on coral reefs are relatively well known and are mostly negative.
Pacific
Priority 2: Impacts on fisheries resources – coastal and oceanic
The coastal fisheries of the Pitcairn Islands comprise three main components: demersal fish (bottom-dwelling), nearshore pelagic fish, and invertebrates captured from intertidal and subtidal areas. Overall, catches for the subsistence and artisanal sectors have varied between four and 12 tonnes per year since the 1950s.
Image 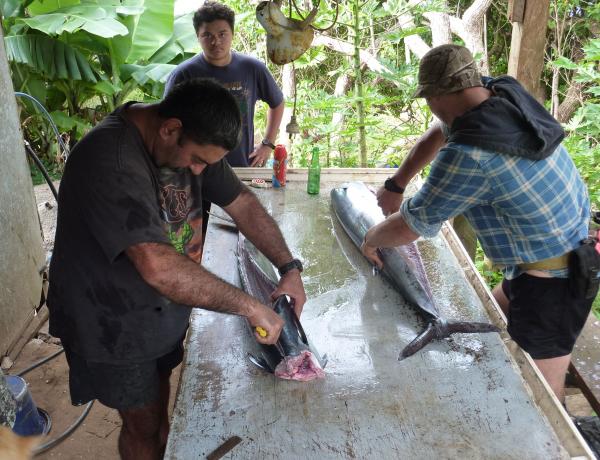 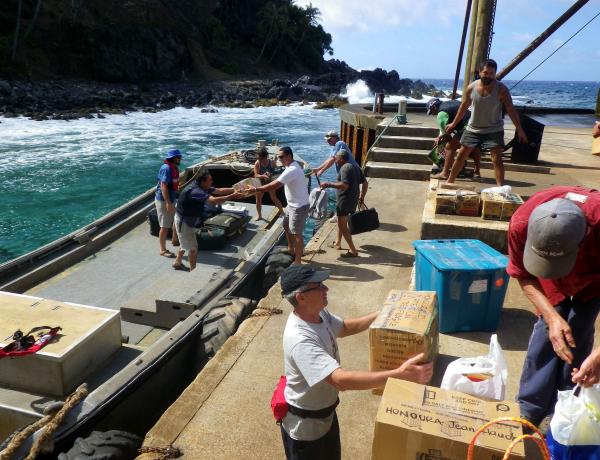 Pacific
Priority 3: Impacts on imports to the island and the safe movement of goods at sea
Pitcairn Island is the only inhabited island in the Pitcairn group, and the only island that has a community that relies on imports for food and essential goods. In 2018, Pitcairn Island imported US$2.19M worth of goods. Rising sea levels, storm surges, severe storm events and heavy rains will impact infrastructure networks on Pitcairn Island and the safe transport of goods via shipping to the island.
Regional nature-based solutions case study

Since then, the Blue Belt Programme has assisted the Government of the Pitcairn Islands to develop an MPA Management Plan, developed seabed maps to minimise the risk of anchor damage, assisted with the development of a whale watching code of conduct and provided assistance through satellite surveillance for illegal, unregulated and unreported (IUU) fishing.

Downscaled climate change projections are not currently available for the Pitcairn Islands and future scenarios are based on global and regional scale model outputs. Localised projections would allow more focused management plans to be devised.

Regular monitoring would provide a baseline to determine the extent of current impacts from non-climatic stressors that could be managed to build the resilience of the ecosystem to climate threats. Marine habitat monitoring could also provide an early warning of impacts, such as coral bleaching, crown-of-thorns starfish outbreaks and coral diseases and inform responsive management.

The implications of climate change for coastal infrastructure and security of shipping also warrants further examination. Information on the location and condition of existing infrastructure, building standards that have been applied and future infrastructure plans is required to determine the areas of greatest risk.